When you’re making anything out of wood — whether it be furniture, molding, or any kind of frame, you know you’d need to make angled cuts. You need a miter saw.

In this article, I am going to talk about one of the compound sliding miter saws that people are talking about: the Craftsman SM2509RC.

Read on to understand what this saw has to offer, what its key features are, its ideal uses, and its flaws and weaknesses. By the end of this Craftsman sliding miter saw review, you’ll know whether this is the right tool for you! 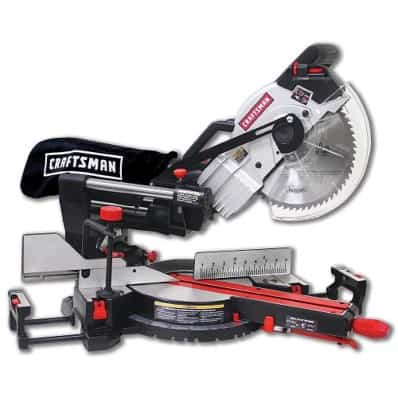 Coming from the globally celebrated brand Craftsman, which has been around for almost a century now, woodworkers have high expectations for the Craftsman 10” compact sliding compound miter saw, or the SM2509RC.

This saw is the successor of the 21237 miter saw. What sets it apart from its predecessor is its flexibility and versatility.

In fact, it’s one of the few sliding miter saws that offer a unique wall-hugging feature. This is where the side rails hang beside the blade allowing the saw to cut and miter even when backed up against a wall.

Flexibility is its key selling point, but I personally like to look at motor power—and at 15.0 Amp, I wasn’t disappointed. Its speed and torque allowed me to cut through all kinds of hard and soft pieces of wood with ease.

This miter saw is ideal for a wide array of customers ranging from pro contractors to hobbyists. It’s light, portable, and gets the job done. Plus, its engine doesn’t make too much noise when running—keep those nosy neighbors happy!

However, I can’t recommend this option to professionals who need to miter thick pieces of wood. Any piece of wood that’s thicker than 4×4 would be difficult to miter, especially if you have a small, limited working space.

Best Features of the Craftsman SM2509RC

These key features separate the Craftsman SM2509RC from the rest:

What truly sets the Craftsman SM2509RC apart from other miter saws is its versatility. Hobbyists in small, tight shops will definitely appreciate this feature.

Unlike other models, its side rails are not attached behind the blade, but rather beside it. This allows you to get a full range of motion even when the blade is pressed against the wall.

The new Craftsman miter saw has a powerful motor, but it doesn’t make too much noise when running. I personally appreciate this feature since I work in a small shed in my yard. I need a quiet tool that won’t disturb those around me even when I’m working late at night.  After all, when inspiration hits, there’s no stopping it!

Are you a beginner? Then you’ll love this next key feature!

The Craftsman SM2509RC has a functional, ergonomic design that makes it easy to handle and carry around. It doesn’t take much space, so you’ll have room for all your other woodworking essentials and power tools.

For contractors and construction workers, on the other hand, this feature makes it easier to transport. Dragging a heavy wheelbarrow of tools around isn’t very fun, is it?

Most miter saws can bend at 45 degrees, but not the Craftsman sm2509rc. It offers more flexible cuts with a saw that can swerve left and right by 50 degrees. Paired with its unique wall-hugging feature, you’ll be able to achieve deeper, slanted cuts with ease by using this miter saw.

A sliding miter saw can cut and slice wider boards and planks. In fact, you can use the sliding Craftsman miter saw to slice through a thick 4×4 piece of wood, which isn’t something standard miter saws can do.

Seasoned woodworkers know that most miter saw dust bags are effectively useless. No matter how you angle your cuts, sawdust will still scatter—but this Craftsman miter saw is different.

Unlike its competition and predecessors, its dust bag is well above-average when it comes to collecting sawdust. You can further boost this feature by adding a shop vac to the saw.

Before buying a miter saw, or any product, it’s important to review its pros and cons. Doing so will help you reach an objective decision. What I found, however, was that most Craftsman miter saw reviews were very biased. They didn’t show the saw’s real weaknesses.

As both a buyer and woodworker, I found that very annoying. That’s why I took it upon myself to create a complete, objective, and unbiased list of pros and cons. All these are based on my own findings when I gave this saw a test run.

Still on the fence about whether you should buy a Craftsman miter saw? What I do when looking for a new woodworking tool is browse through different comment boards and look at user ratings. Getting real-life testaments and comments is very helpful, after all.

What I found was that users praised the Craftsman miter saw for its ability to create clean, accurate cuts. It saws smoothly, and the blade glides along the railing perfectly. That makes it perfect for creating small, precise pieces such as picture frames, crown molding, and door frames, among others.

The thing is, some woodworkers claim that its ability to create a clean finish isn’t very reliable. So, if you need to make accurate miter cuts with this saw, make sure you have sufficient space to move your arms and elbows around in.

Hobbyists who work in tight spaces also pointed out that its dust collection system is better than most other miter saws. Even if you had limited space to miter in, you won’t have trouble with the sawdust.

What struck beginners the most is its low price point. The SM2509RC is very budget-friendly as far as power tools go.

If I had come across the Craftsman SM2509RC back when I was a newbie, I would have definitely bought it right away. After all, it’s a versatile miter saw perfect for all kinds of woodworkers.

When it comes to flexibility, I have no complaints. In fact, I’d give it a solid 10 out of 10! With a miter saw that can bend at 50 degrees and a unique wall-hugging feature, you’ll be able to use it for all kinds of projects and pieces.

Some users complained that it was a bit on the bulky side, but I don’t have an issue with its weight. It’s not that heavy, and anyone can easily carry it around.

Now, when it comes to power, I never go for a weak miter saw. Nothing annoys a woodworker more than a saw that can’t cut through wood. What’s the point of even having it, right? In that department, I have no complaints with the Craftsman SM2509RC. So far, I’ve never had any problems with the motor’s torque and speed.

After considering all its features and benefits, I can confidently recommend this to:

While it may be a great, all-around miter saw, I don’t recommend the Craftsman SM2509RC to woodworkers who regularly miter very thick boards in small, cramped spaces. You’d be better off with larger options built for heavy-duty slicing.

Things to Consider Before Buying a Sliding Miter Saw

Shopping for a new sliding miter saw is no easy task. Like I said earlier, the first time I went out to buy a miter saw was a complete, embarrassing disaster.

Don’t want to end up as I did? Then make sure you check the following when looking for a sliding miter saw:

Never underestimate the risk of using a faulty power tool. An unnoticed factory defect can lead to some serious injuries if you’re not careful. That’s why the first thing you need to consider is safety. As much as possible, look for modern options with safety features such as fence guards and electric brakes.

Next, check out the saw’s motor power. For maximum versatility, go for miter saws that have 10 to 15 amps of power. Don’t ever purchase a weak, underpowered saw, even if it’s very cheap, because it won’t have much use.

Woodworking is great, but cleaning up sawdust is a drag. If you don’t want to spend long hours sweeping dust and shavings off the floor, then make sure you buy a miter saw with a functional dust bag.

However, looking for one is actually harder than it sounds. Most popular options have relatively weak dust vacuums.

Pro Tip: Want to avoid scattering the sawdust everywhere? Try not to slam the blade on top of the board. Instead, slide it all the way up and down to allow the bag to catch all the sawdust and wood shavings.

Does this miter saw model have a laser guide?

Yes. The Craftsman SM2509RC has a laser guide. You’ll find the switch above the handle.

Will the blade guard strike the saw base once the unit gets a bit older?

As of the moment, no users have reported that their Craftsman miter saw’s blade guard hits the saw base.

What pieces can you cut in one pass?

The Craftsman SM2509RC can easily cut simple pieces like decking, laminate flooring, shelving, and crown molding in one pass.

That’s everything you need to review before buying a Craftsman miter saw model SM2509RC. All that’s left is to reassess your goals and determine whether its features match your needs.

Overall, it’s a versatile miter saw perfect for both professionals and hobbyists. With a powerful motor at 15.0 amps, you can use it to cut through both hard and soft wooden boards.

Plus, it has a flexible, wall-hugging saw blade. This allows you to create deep, accurate cuts even in a small, cramped working space. You won’t have trouble using it to create various wooden pieces such as roof decking, trim moldings, and door framings.