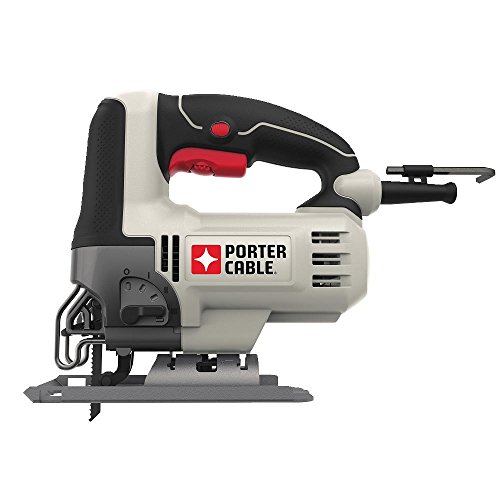 Are you tired of using jigsaws that don’t get the balance right? Wouldn’t it be nice to have a tool that didn’t put undue weight on your wrist, forearm, or elbow as you worked?

The Porter Cable 6-amp orbital jigsaw is easily one of the most balanced models in this category today. Not only does this promote a consistently good cut, but you can stay working for longer periods of time because you don’t feel as fatigued.

What Are the Features of the Porter Cable Orbital Jigsaw?

We really liked the 7-position speed dial that has been integrated into the trigger of this orbital jigsaw. Although the positioning of the trigger could be somewhat problematic for some because it requires an extension of your grip, the accessibility of this design does lend toward a more natural cutting position and experience with the tool. When this is combined with the 4 orbital settings, you’re able to make a good cut on a wide variety of tools.

There are these additional features to consider with the Porter Cable orbital jigsaw as well.

Compare these features to the Skil Orbital Jigsaw, and you’ll find this Porter Cable model is at par.

What Could Be Improved with the Porter Cable Jigsaw?

We found that this jigsaw is surprisingly good in almost every aspect of the tool. The one issue that we discovered that could be an issue for some users is that some saw blades, when set in the standard position, do not sit square to the base of the tool. Some blades lean a bit forward, which can cause an excessive number of chip outs while making a cut. There’s no way to correct this issue either except through trial and error with specific saw blades.

This causes the saw to “stick” during a cut at times, which forces the user to push it forward to continue the cut.

Outside of this one issue, we found the Porter Cable orbital jigsaw to be a fast and effective tool that can give you consistently good cuts. Take a look at the squareness of the blade to the tool before beginning a cut and you’ll be able to counter the one small problem that seems to come up in some models, giving you a great jigsaw at a better price.

Overall, the Portal Cable Orbital Jigsaw is one of the best jigsaws we’ve tried. It would be nice to have a feature that would allow the jigsaw to change the depth of the blade so that users could work on projects of different thicknesses without the need to have a blade change. It does, however, make appropriate cuts through both hard and soft woods, making it a versatile tool in its pricing range.