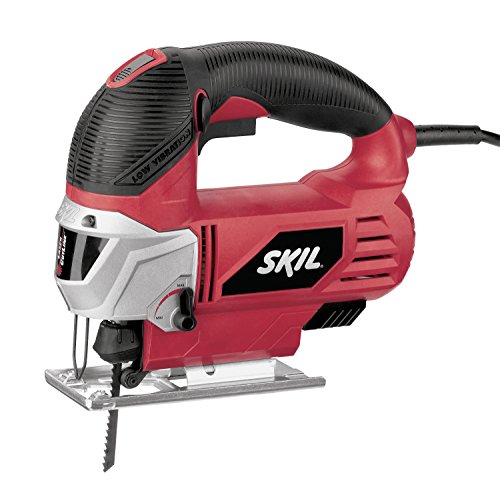 The best jigsaws on the market today tend to come with some top features. This includes a laser guide, high am motor, and different orbital cuts that can be adjusted to the user’s preferences. The SKIL orbital action laser jigsaw proves that you don’t have to pay hundreds of dollars for a new tool to take advantage of these features.

For about $50, you receive a built-in laser guide that assists in the creation of straight and accurate cuts. You have an orbital dial to flip on the side of the tool that allows you to be aggressive or smooth with your cutting approach. The equipped trigger also provides variable speeds so that you can adjust your approach to the cut whenever something occurs when you’re woodworking.

It’s even been custom-molded so that when you set the tool down at rest, it won’t damage the blade or your working piece.

Basics and More with the SKIL Orbital Action Laser Jigsaw

It’s the laser guide that kicks this jigsaw up beyond the basic. What you do receive is a 6-amp jigsaw that can make easy and precise cuts consistently. The power is comparable to most other tools that may be 4 to 5 times higher in price.It’s also quite versatile, as it also accepts U and T blades.

Skil is right up there with this Porter Cable 6-amp model in our top list of recommended jigsaws.

What Could Be Improved with the SKIL Orbital Action Laser Jigsaw?

We did notice that the laser guide does tend to drift a little on you while you’re working. You won’t want to rely 100% on this feature as you’re making a cut.  You’ll also need to work hard to make a good vertical cut if you’re using a thin blade because the tool does have a tendency to stick.

But our one real issue with the tool’s design and performance is the fact that the trigger lock sometimes seems to catch in the “on” position. This puts the user in a position where they struggle to get the tool to power down without the risk of burning the unit out by pulling the cord.

We were able to work the lock so that it would disengage the couple of times it did stick on us, but if this happens consistently, the actual switch itself could break and lodge into place.

You don’t receive any blades with the jigsaw out of the box at all, so make sure you grab some when you make your purchase. This tool does not come with a case either, nor are you given the ability to attach one of the best shop vacuums on the market today to limit your dust.

We found that the tool was easy to set up. The jigsaw performed consistently well, with only some struggles on vertical cuts. The grip provided by the SKIL orbital action laser jigsaw is useful. In our opinion, it’s a great buy for a useful tool that can help with your woodworking needs for a good while.

We think it’s the best jigsaw in its price range.